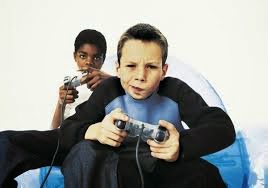 I hate them! I love them! VIDEO GAMES has become an addiction with many faces in my home.

This week, I figured I'd give my 10yr old a reprieve from his video-game punishment.

DRAWBACKS OF VIDEO GAMES for ALL AGES

When I hear people say that they let their kids play video games for hours and hours, all weekend long I cringe.

I'm a techie myself, and design large computer systems - even had dreams of writing and creating my own video games one day. YEP.

Until I realized as a parent how much time this sucks up and the NEGATIVE aspects of being a full-time gamer can be.

HAVING AN OLDER CHILD who plays mature games is detrimental when you have a younger child who can't.

And HAVE YOU - yes YOU - the PARENT actually sat down and played and watched these games with your kids?

Oh, and if your kid can't watch an older sibling play - they WATCH GAMERS ON YOUTUBE show them things that they can do in the game that may not be easily figured out.

So, my kids are on another 3 month video game sabbatical. And when their older brother leaves for college - they may not see a video game system for the entire school year.

SO. THIS WEEK WAS FRUSTRATING

We had to devise yet another way to rid my 10yr old of his video game obsession after realizing that he'd been sneaking downstairs at night while everyone was asleep to play video games in wild abandon.

My older dd too is hit with the Minecraft bug, but that's not all she sneaks and plays either. She too is going on vacation from video games as she's been playing Call of Duty, Assassins Creed and Grand Theft Auto (all games belonging to her 19yr old brother)

Sheesh! I hate being the meanie parent that has to pack up video games and systems and hide them - locking them away for months.

SO. THIS WEEK WAS EXCITING
Hubba and I went off to a Marriage Retreat! Lovely! After 21 years of marriage we enjoyed mentoring younger couples. We even joined up with 2 other couples we went to college with.

I ordered NEXT YEARS MATERIALS! Woot! Woot! I really think I am a bit of a curriculum junkie.

Tynker.com for my 10 year old to use next week because I just found out about it and ... ALL OUR SCHOOL LESSONS will be done next week (happy dancing!)

Speed Racer's finishing up test and quizzes with Abeka, his Currclick Spanish 3rd week and he asked for a break from Xtramath.com where he is starting on Multiplication.

Since most instruction will be ending for both next week we are doing a lighter schedule.

Keeping instruction time to the following: