Using Your Summers for Fun with Learning

Every summer tons of kids in our neighborhood head off to camps, summer enrichment. Mixing in learning with fun is the best part of summer. It gives you the opportunity to try something new, to build other aspects of your kid's full being and to have fun.

CAMPs, COLLEGE FOR THE SUMMER, VOLUNTEERING

I was really wanting to send my daughter to a Japanese summer camp. She just wasn't excited about going hundreds of miles away to go.

Many camps have financial aid if you ask them. Getting in the applications early is important.

This is when I as a working parent can get those field trips made up. During the school year, since both my husband and I work, we aren't able to do many day trips.  However, in the summer, there is no school and we make time to take day trips and explore with the kids.

WHAT DO YOU DO DURING THE SUMMER?.

Exposing Kids To New Things - Even When They Say No 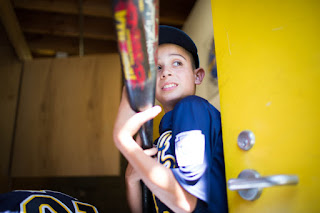 FEAR of the UNKNOWN or INTIMIDATED or just UNMOVED

These are some of the reasons my kids refused to try new sports, adventures, foods, activities or anything.

This was a pitfall I refused to let them fall into. There was so many things that I never tried to do because of the above and they became missed opportunities.


DON'T LET THEM WALK AWAY without TRYING FIRST

So I made a deal with my kids. Try it for the season, and if you don't like it, we will conquer something else.

They had to make the commitment to at least try the activity, sport, or experience for the duration before moving on.


MOST TIMES THEY FIND ~ THEY ACTUALLY ENJOYED IT

In most all situations where I had them try something new, they enjoyed it much more than they anticipated. Some things, they've even stuck with for years more than the initial introduction.

This year my Speed Racer has tried Paddling (and he loves it) and my Tiger Lilly has tried working with a personal trainer and she likes it (some days).

Experimenting in Learning with CLEP, Straighterline and Study.com 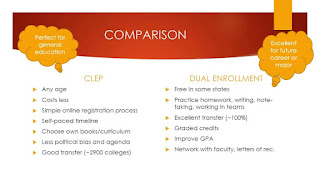 We Are Doing It All
Dual Enrollment with
CLEP, DSST, Straighterline, Study.com, Online College Classes

Don't give up when one method doesn't gain results, try others, and see where your kid blossoms.

Since starting homeschooling my kids about six years ago, I really have been amazed at how having control of their High School years was so incredibly freeing for us.

Each of them approached Dual Enrollment in different ways, partially, because of my lack of knowledge on the subject, and because of what they wanted to do.

Finding what fit their LEARNING STYLE and LEVEL OF MATURITY is really what mattered. In addition to that, since my husband and I worked out of the home, the kids had to do most of it independently with me checking progress.

CLEP and DSST Test
Taking these test usually took my students 8 to 9 weeks if they weren't familiar with the subject. The best trick is to use the CLEP or DSST as a FINAL EXAM or sorts when your child finishes US History, ALGEBRA, ENGLISH, GOVERNMENT and more. We used the study lesson plans for homeschooled students found here: (Free Lesson Plans - Provided by  Tricia McQuarrie)

OUR EXPERIENCE WITH CLEP and DSST

Rose, my oldest girl, did three CLEP test for credit. If I'd known about this type of testing, I would have had her do many of her credits this way, she is a great test taker with wonderful study skill discipline. She was 15 yrs old when she took her CLEP test. She finished her AA degree in 1.5 yrs and BS in 2 yrs, and is now working on her MS, which will be finished in 20 months total.

Tiger Lilly was 13 yrs old, studied for about five of these test, only passed one, and requested to just take Community College courses and online college courses. She finished her bachelor's degree in 3 yrs.

Speed Racer, 14 yrs old, started studying for CLEPs and DSST and although he did well, he really didn't do well sitting still during testing. He wasn't used to doing it, since I no longer required stillness for study for him. If I let him roam, he tested well. When I told him he couldn't have music while testing, and  he had to remain in his seat, he told me that doesn't work for him. I realized that although, he could do the test, retain the information, he just wasn't mature enough to adhere to taking a test in a testing center with rules. So, I had to find another way. No test for him. We decided to use Straighterline and Study . com.

Razor Ray, was 18 yrs old when he took three CLEP test for college credit while in Community College, he passed two, but failed the Calculus test since he didn't realize the calculator was in the test. He decided to take the actual class and felt the 3 week review he did of Calculas for the test was a good start.

As far as Dual Enrollment into a college setting was concerned, I needed a setting that was different for each child. We did it three different ways.

Rose was 15 yrs old when she was enrolled in Community College and took online and in person classes there. Her older brother was attending and playing lacrosse there, and she ended up joining a team also. This really served  her well as she and her brother attended CC and University together. She went to a brick and mortar college since her major was only offered at 2 local universities.

Tiger Lilly was 14 yrs old when she was enrolled in Community College. She took one class in person and didn't like it. We moved her from CC to online university named University of MD, University College which is local and have the online course structure that we both liked. Eight week classes, course work spelled out clearly and great support system with free online and in person tutoring. She is finishing her degree there and she will be just turning 17 yrs.

Speed Racer is now 14 yrs, we've registered him at University of Maryland, University College  and Bluefield College as a non-degree seeking student, sent his homeschool official transcript. He is taking 2 classes online for 8 weeks with UMUC, but not with Bluefield College since BC didn't have any of the courses he wanted or needed to take towards his degree at UMUC.

So, Bluefield College didn't work for Speed Racer, no classes that fit his schools requirements. So we backed off that option.

The best Universities in this scenario allow a LARGE NUMBER OF CREDIT TRANSFERS.

The BIG 3 Colleges that allow you to transfer the highest amount of credit are:
Thomas Edison State College

HOW I USED STRAIGHTERLINE and STUDY.com TOGETHER
TO SHORTEN Degree Goals

Tiger Lilly started using Study.com when they were free and called something else. At that time, we didn't really understand the transfer to university credits and she used it for High School instruction and CLEP prep.

BUT NOW, I understand the benefits much better.

Speed Racer we are going for both. We are USING both STUDY.COM and STRAIGHTERLINE.COM to help Speed Racer earn college credit faster, cheaper with an easy credit transfer since UMUC.edu is a PARTNER COLLEGE to BOTH.

I figured this out completely by accident as I was researching other methods besides CLEP testing for credit.

THE END OF OUR SCHOOL YEAR RESULTS


UMUC, my son's university of choice, allows 90 credits to transfer.

STRAIGHTERLINE courses will be the FIRST COURSES Speed Racer takes for lower level credit classes (100 to 200 series credits) to transfer to UMUC.edu which is a PARTNER COLLEGE. Speed Racer is attempting (he's already started 2 classes) will have these characteristics (1) Open Book Final or (2) No Final (3) Possibility to pass prior to final if pass all test, quizzes and assignments prior to final. -40 credits can transfer from Straighterline and AFTER completion of 4 classes, he qualifies for UMUC.edu IN STATE RATE!

STUDY.COM courses will be focused on HIGHER LEVEL CREDIT COURSES (300 series courses that transfer to UMUC.edu) and REQUIRED COURSES not provided BY Straighterline. There are classes that meet my son's elective requirements that are for his high level credits. Straighterline doesn't have any high level transfer credits, BUT Study.com does. This is where we hit jackpot. Also, the have a Scholarship called the GUARDIAN SCHOLARSHIP which allows 2 free exams (6 credits) a month without upgrading from the $29.99 fee to the $199 monthly fee!

DUAL ENROLLED: University of Maryland, University College accepts up to 90 transferred credits.This school has his desired major, so we transferred credits from both Straighterline (after taking 4 classes they gave him IN STATE tuition, and accept up to 60 credits as direct transfer and through ACE (transcript) service). They take homeschooled students and high school students for early entry enrollment and allows them to take 7 credits a semester. Their classes are offered online, in person and a hybrid of both in 4 week/8week increments.

18 Classes left for Speed Racer to finished with a BS DEGREE at UMUC!


THE AGE FACTOR
And Graduating Early

Graduating with a BS degree by 18 yrs old isn't a bad thing. I wanted my kids to be able to have a gap year or two after college to volunteer, do internships, attend grad school, study abroad or work. Whatever they wanted to do with no rush.

Rose, my oldest girl studied abroad for a summer, stayed at the beach in Maui for a month with friends, then decided she wanted to start working while pursuing her MS degree.

Tiger Lilly, my 16 yr old that will be 17 yrs when she gets her BS is working a summer internship, enrolling in a MS program, but also taking Art and Japanese classes at a local community college. She plans on volunteering at the tech center near us and working on building more clients for her Micro Business. She wants to go to Japan, but with her sister instead of a study abroad program. She's our shy one. We are encouraging her to do a study abroad during her pursuing her MS degree.

Speed Racer will be about 17 yrs old when he finishes his BS in Information Systems. He wants to attend a 2 yr college program to learn to fix airplanes while getting his Commercial pilot license. Then attempt to get a job as a Pilot. Also, plans on using his IT degree and experience fixing planes to invent stuff (I don't know what, but he seems to think he will come up with something). In addition, he wants to tour the world dancing professionally (yeah, he said that and is a pretty good hip, hop and breakdancer).

Don't assume that all methods work for every kid. Try a bit of them all. I do find that online learning that allows me to keep my kids accountable on finishing assignments on time has made the transition to college courses much easier for them than in my case, or the case of my older 2 kids who went the 'traditional' live on college campus direction.

Maturity and your kid's learning style matters. Teaching them to study, take notes, write well is important for the transition to college courses.

Life can be so much fuller when you do things a different way.