One Made It to The Finish Line 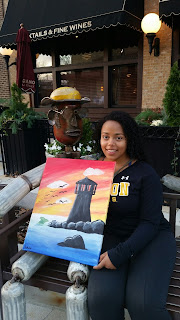 From Traditional School To Homeschool
She was my first adventurer! The 2nd child that asked their working mom to homeschool them. She encouraged me. Told me I could work and homeschool her. It would be like helping with homework.

Her accomplishments are wide. She humbly doesn't realize how proud and in awe she's made me.

Here's the journey. From Private School, to Public school at 2nd grade. She stayed at the top of her class. In Elementary, she was ever watchful of her grades and noticed that her teachers were giving her low grades for the quarter when she'd made 'A's ' on all her assignments. My dutiful 5th grader started scanning and copying her grades to keep a 'check' on her teachers. This paid off, by making her an 'A' student through middle school and on to High School.

In High School, she was in the 'gifted and talented' program and took AP classes and Computer Science classes. In those classes as on of the few girls, she had to do many 'group' assignments alone as her fellow computer programming male peers, didn't want her on their team. So she and the only other girl, made it their mission to beat out the boys in time and quality of the assignment. They did.

She also tried out for the Lacrosse team as a goalie since she'd been going to Lacrosse camps and were told by her coaches there that she had a great talent. But at her high school, she got 'cut' by her coach. Although, discouraged, she started running track and loved the sport.

At 10th grade, we moved to another home, and she didn't want to attend the school there. Also, her younger brother, Speed Racer, kept saying how he wanted to be homeschooled since he was having so many problems at school. Well, his big sister listened.


From Homeschool to Dual Enrollment to Community College

We started homeschooling her, and I just admitted her to the local Community College at age 15 yrs, where she was recommended by her Math teacher to become a Math aide and tutor at just 15yrs old. She was uncomfortable sharing her age, but we got her the work permit and she started tutoring and acting as an Aid in Math, Computer Science and English.

Lacrosse season started, and she tried out for the team, not thinking she'd get selected, but she was. Shortly after, the 1st string goalie left, and her coach gave her a scholarship to play that year. She was 16 yrs old. And was able to 'coach' her former high school team members at a workshop given at her Community college for lacrosse. ~ Talk about blessed.

Then she researched the steps needed to become a Dermatologist, her initial chosen career. After determining that she didn't want to be in school that long, or pay that much, she considered being a Nurse Practitioner or Physician Assistant, but her love of computers led her to BioInformatics that combined Pre-Med and Computer Science.

She graduated with her AA with a 4.0 in BioInformatics and was the YOUNGEST and FIRST graduate from her Community College for that major within 1.5 years.


From Community College to University to Beyond
She went on to a local 4-yr University, with a scholarship and within 2 yrs she completed her dual Bachelors in BioInformatics and Computer Science at just 19yrs old.

She is speaking at her University's graduation, has a new job as a Data Scientist, and has convinced her entire family to take the adventure with her and move to her 'dream' location in Hawaii. She will continue her MS in Data Analytics while working.

Mom is so proud and blessed to have you as one of my amazing daughters.